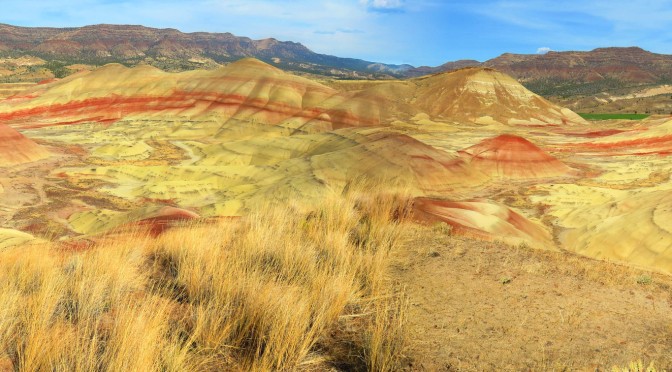 When most people plan a visit to Oregon, they’re thinking about the pounding surf of the Pacific Ocean, walking on warm sands, or maybe experiencing the rage of coastal storms, from a distance. Still others might pay a visit to Mt Hood and its neighbouring peaks, or even Crater Lake National Park. Few if any have even heard about the three units of John Day Fossil Beds National Monument.

This fall, I had the chance to visit the Clarno and Painted Hills Units, leaving me the Sheep Rock Unit to look forward to. We had but a few hours to spend at Painted Hills, but the drive there through the surrounding countryside made it well worth the drive.

Through years of seepage and erosion, plus the exposure of volcanic layers, the resultant rhyolite clays that have extruded over the years have created a landscape that is incredibly unique. Though these formations are fragile, their composition does not provide a fertile growing medium, thus, being mostly free of vegetation, the layers give the hills their painted appearance.

Camping in the actual monument areas is considered off limits, but more information can be found here on lodging, among other things…..

I spent most of my time just enjoying the views from the trail that runs from the first parking lot, but there are a number of other paths to walk. I also strolled the nearby Painted Cove Trail, which comes complete with a boardwalk. This, and the other units, as the name implies, have also been the sites of significant fossil finds.

If ever you are travelling through Central Oregon on Highway 97 it is time well spent to meander your way to John Day Fossil Beds. You’ll certainly be glad you did!

Remember when you are there to stick to authorized trails so that you do not damage any formations. They have taken countless centuries to form and can be ruined in seconds by careless human footsteps.

We were impressed not only by fascinating geology but also by the solitude of the John Day River and its quiet and colourful mountains. I know we’ll be back again!

Strolling the new boardwalk at Macmillan Provincial Park a few weeks ago. Looks like a lot of time and effort was put into this work. Cathedral Grove might be a tourist trap, to some, but in fact it is a great place to introduce a novice to old growth forests. If it is capable of inspiring more people to discover the joys of these places, then perhaps someday they might help to save them.🌲🌲🌲
A couple of looks at Englishman River Falls from unconventional viewpoints. The hard rains a couple of weeks ago had the waters flowing at very high levels!
Summer look at Nahmint Mountain with Peak 5040 off to the right here. Did not have much time to get this shot as the clouds were active. @stasher_bc had me thinking earlier today about how much I enjoy B&W photography!
Is there a place you visited this year that will forever live in your mind's eye? Did you know it then, or did it just occur to you later? Treasure the moment well. This is Exodus. 🏔️🌄
It's not every day that you get an audience with the Red Creek Fir! This giant Douglas Fir, the largest in the world, has a diameter of 4.28m/13.87' and is estimated to be at least a thousand years old. Its status is protected 🌲
It's November. You glance outside and it's raining. Not just raining, but raining hard! Whenever that begins to get me down, I am reminded of all the days I have hiked the forests in inclement weather. There is a certain exhilaration to it all, just being out there and being witness to the dynamics of precipitation. It is what allows coastal temperate rainforests to thrive, our liquid lifeline, if you will. There is nothing more important on this planet than water, giver of life! @intheshadowofgiants1 🌲🌲🌲#water #coastaltemperaterainforest #sanjuanriver #portrenfrewbc #hikingadventures #hiking #forest #vancouverisland #britishcolumbia #bushwhacking #riparian #trees #treesofinstagram #sitkaspruce #bigleafmaple