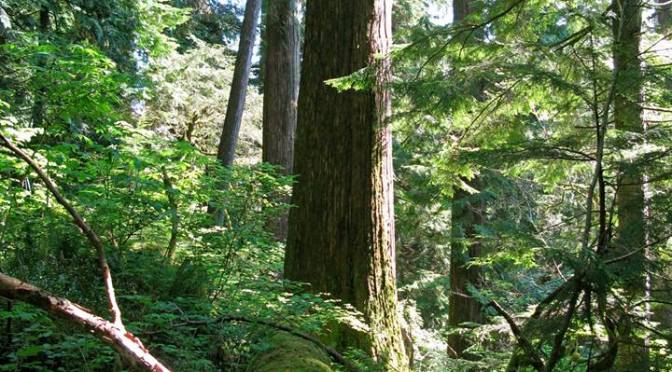 The Blue Cedar Grove. It’s a title that stirs the imagination, kind of like The Golden Spruce, I remember thinking, when I first read the words. I never did remember to ask Ralf Kelman exactly why he’d chosen such a name, but as soon as I saw the name on the Western Canada Wilderness Committee (WCWC) map, I knew I needed to see these trees!

The first trip I made to this grove was hardly a day filled with great inspiration. It was a one of those spring days when it’s hard to anticipate what way the weather is going to turn. In short, I guessed wrong. Only half an hour into my bike ride up the valley, light rain began to fall, escalating into a torrential downpour by the time I had left my ride to hunt for the trees. I did decide to press on, but it seemed the further I walked the harder it poured! I made it as far as a soaking wet, moss covered boulder field before I conceded defeat.

The high point of the day was returning to my truck to don dry clothing, devour a sandwich, and drink a thermos of hot chocolate laced with Grand Marnier! ( I highly recommend that last part if you haven’t tried it before, just don’t drink and drive. Take a very long nap, like I did. )

It was four years later in 2008 that I finally returned. On that occasion I chose perfect weather, with the sun shining warmly on my birthday, no less! In a scant twenty minutes from where I left my bike I reached the grove, which certainly did not disappoint. 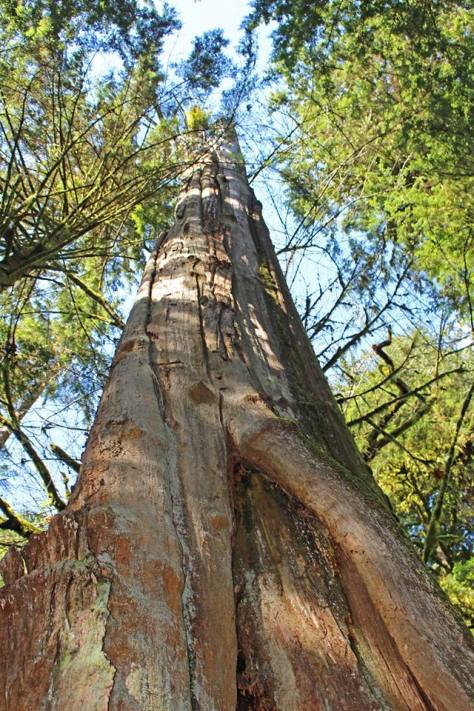 Tall and towering cedars, draped in moss, set the scene. The forest floor and understory were a carpet of innumerable greens, though it was far from easy to decide where to place your next step.

I was quite surprised to also find a number of very nice Douglas Firs interspersed here and there, and along the creek a number of massive Bigleaf Maples held court, shading me from the midday sun. Nearby, a quizzical deer observed me clambering about, no doubt wondering what in the world I was doing there! 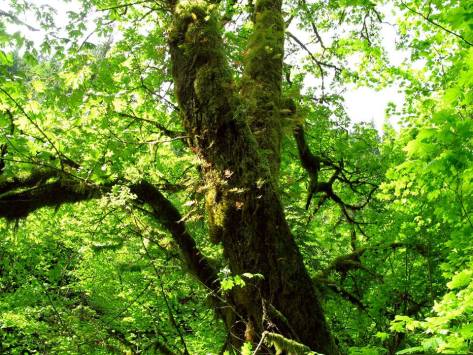 After enjoying the grove, I was soon drawn uphill, following the dull roar of water that I could hear in the background. When I found the source of the noise it was a surprise to me. A winter avalanche had roared down the creek canyon right down to an elevation of 500 meters. By the month of May the snows had melted out and the creek had created a cavern beneath them, leaving me something highly unique to explore. I dared not venture inside it, though, as I could hear the creaking and groaning of shifting ice echoing from within.

Some years later I was to learn that this creek was highly volatile indeed, as during heavy rains the entire couloir released and stripped out the creek bed right down to earth. You can still view the scars of that event in Google Earth images, another five years after it occurred! Here then is the walk up the canyon as I viewed it that day…

Having finally run out of time, I descended the gully once again, vowing to return. The next decade, however, would have a lot to say about whether that was going to happen, but suffice it to say that I was a very happy hiker on that sunny afternoon in late May!

In 2018, I would finally return again, on another absolutely resplendent day. I knew that soon I was to be moving away from the North Shore Mountains, and the Blue Cedar Grove compelled me to visit one more time. The day of discovery was a rewarding one, as I found several sizeable  Pacific Yews , hiding in plain sight as they always seem to be. One of them was so twisted and gnarled that I named it “The Elk”, for its upper branches that gave the appearance of antlers.

I will never forget having lunch on the banks of O’Hayes Creek that day, warmed by the sun as countless birds sang nearby. It may seem trite to say I feel as though I’ve developed a bond with this place over the years, but I can’t think of any other way describe it. It is, without a doubt, one of the Seymour Valley’s special places. Here is a guided tour of what I experienced that day. 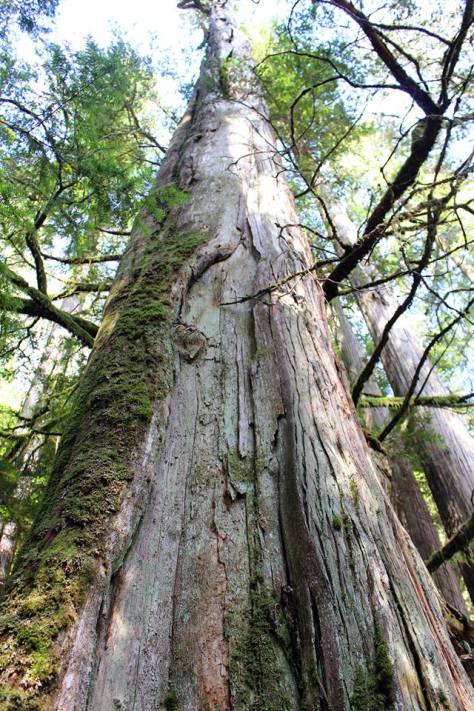 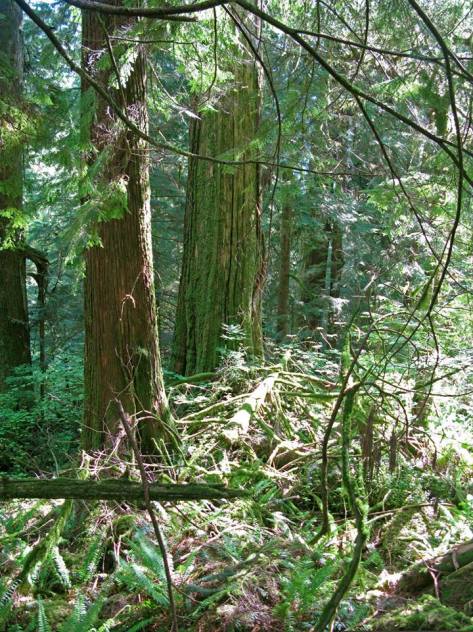 Imagine, if you can, the Seymour Valley in the late 1800s. It was a land almost completely undisturbed, abundant with wildlife, and blanketed with one of the finest coastal temperate rainforests this land had to offer.

With the influx of settlers and the further displacement of indigenous peoples, however, everything changed. Much of the valley bottom timber was harvested, and the majority that remains many years later is in the stages of recovery. There are, however, places that do remain relatively pristine, and I’ve made it a passion of mine to search for them. The Blue Cedar Grove certainly possesses that magic in abundance, a place that always fills me with gratitude. Should you take the time to seek it out, I’m sure you’ll agree!

4 thoughts on “The Magic of the Blue Cedar Grove”

Have a look at my latest story, all about exploring one of the most incredible forests I've had the good fortune to see here on Vancouver Island! Valhalla Grove is not yet accessible to the public while it is being studied for wildlife and environmental concerns, but thankfully it has been permanently preserved by British Columbia Timber Sales (BCTS). I was more than happy to assist @intheshadowofgiants1 in photographing and measuring these trees earlier this summer! 🌲🌲🌲
Crashing waves at Piper's Lagoon last week
Mt Bishop from afar with the mountains of the Coquitlam Divide and beyond in the background. There is something special about layers, when it comes to photographing mountains! 🌲🏞️ @north_shore_explorer
Wave action at Piper's Lagoon Park in Nanaimo during the recent king tide. Wind gusts were about 50 km/hr and it was not possible to walk the beach anywhere
King Tide yesterday! Just a little bit of driftwood at Pipers Lagoon, with big logs being tossed around like matchsticks
Winter sunset in Nanaimo