It had taken us the better part of two years to sort out our move to Vancouver Island, but having finally done that, I wanted to climb a mountain here! Recently I’d joined a local hiking group called Island Mountain Ramblers
, and while checking out the trips they had planned, I discovered one I had to join! Gemini Mountain, deep within the Nanaimo River Valley, sounded like a place I needed to see!

There is limited access to the valley, which is controlled by Timber West, the landowners. It was only possible to hike there in autumn months, according to Matthew, our trip organizer and current club president. The twin summits of Gemini Mountain were ideally located and, if the weather was in our favour, might serve up some beautiful views. The only catch was that we’d be in there during hunting season, but at least the area we were to hike was off limits to the hunters. While that sounded a little scary, of course there were no problems!

Eight of us met at Harewood Mall, and from there drove a long way up the Nanaimo Lakes Road to reach our destination. We stopped at a checkpoint along the way, where you need to report in to let Timber West know where you’re headed. It was at least another half hour before a while before we turned onto the K15 logging spur. A long climb led us steeply up that road to where we’d begin our hike.

The Nanaimo River Valley has a lengthy history of logging, and there are still a lot of active haul roads within its watershed. Despite the piles of logging slash burning at roadside as we climbed, you could still see that the valley maintained its strong feel of wilderness. Somehow it seems to have transcended all the harvesting that has happened there.

After gearing up, we began our hike at about 1200m in elevation, with cold winds urging us on.   Our leader knew the route well having been there before, but there were few markers to show us the way. The forest, a mix of Mountain Hemlock, Silver Fir, and Western Hemlock, was quite enchanting.

Soon the trees became more widely spaced, and we entered some attractive subalpine meadows, then heather covered slopes led us to some dense coastal brush. The mist and clouds were constant companions, and would only leave us for short breaks throughout the day. 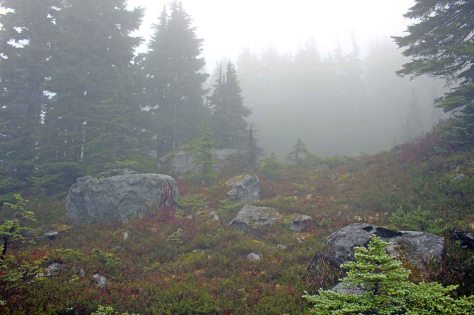 We were soon approaching the first of Gemini Mountain’s two summits, and after a short bushwhack, we were there! As we arrived, the clouds would clear, making good on the promise of those spectacular views. I had been hiking for many years in the same familiar ranges of the Lower Mainland, where I was used to being able to identify most of the peaks around me. Here on Vancouver Island, however, the surroundings were entirely new to me, so there was a great sense of discovery that had me quite enamoured.

After a short break, we began hiking over to the second, and highest summit. This involved trekking over the shoulder of the first summit and weaving our way down to a col between the two. On the ridge, we passed by  bedding and grazing sites of elk herds, and followed their paths quite often. We’d have to return the same way we came, because both sides of the col were lined with steep cliff  bands that would prevent us from taking any  shortcuts. 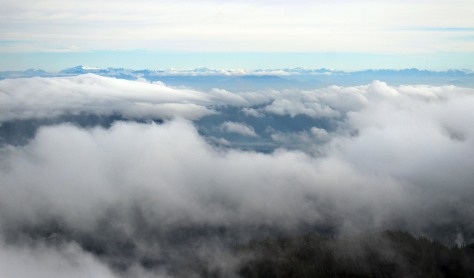 The col was a beautiful and rugged place! Soon the skies parted for at least half an hour, as we rose above the clouds. The ground sloped sharply into a valley below the col, and in the distance the road we had driven up to the trailhead became visible. There was a sea of mountains to gaze at, but most of them were unknown to me.

Soon we left the col and crossed over on a ramp to the base of some steep bluffs. Here we waited, before climbing up to a bench just below the summit. That was the biggest challenge of the day, as the rock was a little unstable in places. While we did that, the skies would clear even more, which had everyone feeling more cheerful.

Our trip leader Matthew, along with navigating, had his two year old daughter in his backpack. He also had his five year old son walking the entire route with us. He did well, and the only help he needed was a boost or two on some of the steepest sections. It reminded me of hiking with my kids when they were young, trying to share with them that fascination with nature, which they still seem to have to this day!

After we climbed the bluffs we then headed up to the summit proper, at 1525m in elevation. The summit plateau was fairly broad, with panoramic views. There were also some alpine tarns that were just beginning to freeze over. I was very happy to be atop my first peak on Vancouver Island!

Pretty soon the weather began to arrive in earnest. The winds now began blowing more briskly as we took a short break before the hike back. Many peaks could be seen in the distance, including Mt Baker down in Washington state.

Light rain began to fall as we walked down to the col, then back up  to the first summit, and finally back down again to the logging road. It seemed like much longer than a five and a half hour hike, yet at 3 pm we were back at the vehicles and rolling down the road to the gate shortly after.

If anyone out there on Vancouver Island has thought about hiking this mountain during the limited opportunity, I’d highly recommend it. As well, if you’re looking for a hiking club on Vancouver Island, join the Island Mountain Ramblers, you’ll be glad you did!

Quathet alpine at sunrise. These are the Coast Mountains as seen from the beaches of Courtenay on one fine September morning
Always remember to look back as well as forward, whether you're climbing or descending a mountain. This is what trains the mind to recognize terrain features and alternative routes. That, and you just might see something really cool! Photos of me, and the last in sequence by @north_shore_explorer 🏞️🌲🏔️
It's difficult to tangibly express why it is that I feel more comfortable in the mountains than anywhere else. I suppose the truth is that while the challenges can be considerable, the ones I've faced in life have simply been harder. Real difficulty lies in the execution of everyday life, and that which requires consistency and dedication. Climbing mountains is easy, by comparison. @north_shore_explorer 🏔️🌲🏞️🐻🌲
They say that if you want the worthwhile things in life, you're going to have to work for them. As with climbing mountains, that will require effort and determination, at minimum. I don't dedicate climbs all that often, but this one goes in honour of my late father in law Albert Marriott. He always worked hard, carried a fine spirit, and I will never forget the love and time he spent with our son, who is autistic and required much attention. Thanks Dad 🌲🏞️🏔️⛵ ♥️ @jan.bailey.5
The many changing faces of Circlet Lake Campground in Strathcona Park. The last of summer fades away as autumn arrives, and it was a privilege to see🌲🏞️🌧️🏕️
Hiking Paradise Meadows and the Forbidden Plateau on our way to Circlet Lake last week. Strathcona Park is spectacular! 🏞️🌲