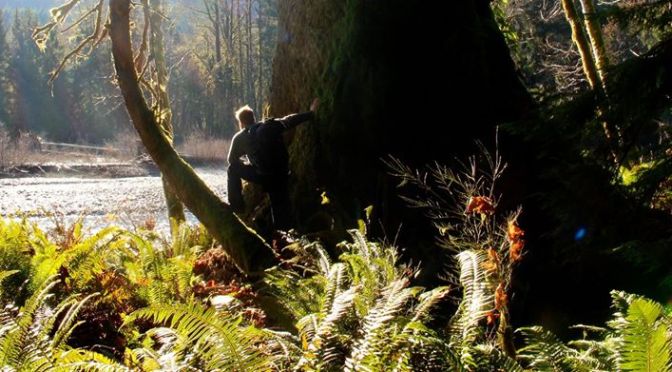 “I’m not sure I remember that being there!” That comment, uttered by yours truly a few weeks ago, is one I seem to make more often these days. The thing is, I think I’m getting to the point in life where some memories seem crystal clear, while others seem so nonexistent they might as well be a figment of my imagination. In the end, I’ll settle for the ability to get to where I’m going and a safe return, with the all important opportunity to reminisce. After all, that’s one reason why I’m writing this story right now!

Frosty fall mornings tend to remind me of my tree hunting escapades. The autumn season, with its diminished sunlight hours, has often been my time for exploring the forests. My other passion, mountaineering, seems better suited to longer days. So it was this November that Duncan and I were rolling along Highway 18 recently, bound for Port Renfrew. Our destination? The Lens Creek Trail and Chesters Grove, a resplendent group of Sitka Spruce and Bigleaf Maple on the banks of the San Juan River.

This wasn’t my first occasion to visit these trees, and, relevant to my introduction here, I was neither convinced I could locate them again, nor was I certain they were even still there. It had been nearly thirteen years since Chris and I, thwarted on our first attempt to see the vaunted Red Creek Fir, had enjoyed them back in February of 2007. As it turned out, the two visits certainly had their similarities, but so too, their differences.

That first excursion was in the throes of west coast winter. Fresh snow had fallen several days before, though the route was relatively clear of obstructions. After parking near the Lens Creek Bridge, we hiked a reasonably easy path, noting the wreck of an abandoned car near the road head. As per the title of this story? Well, I can’t boast of a vintage 1982 DeLorean but at least this tale will take you back in time, and you do get a beaten up 1986 Honda CRX, so hopefully that covers my artistic license?

Soon after that, the trail crossed a small creek, one that years later I would have no recollection of at all. What followed, by my account, was a walk down to the San Juan River on an old road that would take us another fifteen minutes. One of the few distinct things I recalled was that there was a decaying old yellow truck in the bush beside the road, likely of 1950s or 1960s vintage.

The path through second growth trees to Chester’s Grove was a short one that had us among the giants soon thereafter, where we enjoyed what remained of a unique forest. In this coastal riparian zone, the Sitka Spruce is often the dominant tree, accompanied by Bigleaf Maple, and the occasional Western Red Cedar, Western Hemlock or Douglas fir. Growing conditions on the San Juan River are ideal for these natives of the coastal rainforest. The humid climate and warm winds of the Pacific are ideal for growing large Sitka Spruce, which have been known to reach diameters in excess of fifteen feet and heights of up to 190 feet. Nearby trees, such as the Harris Creek Spruce and the San Juan Spruce, have reached enormous size!

While examining these spectacular trees back then, we could not help but be reminded of the past glories of Port Renfrew. While it remains a memorable place, it is nevertheless a shadow of what existed before the advent of logging. These lands, which are unceded Pacheedaht territory, were, and still are to some extent, a natural wonder.  In this new era, greater attention will have to be given to preservation, as valley bottom stands of old growth have become increasingly rare on Vancouver Island. I’ve not been able to find much about the history surrounding Chester’s Grove, but I have now learned  it may have named for well respected Jack Chester. I had earlier thought Jack was a Pacheedaht elder, but recently I received some more information about him from his eldest daughter, as follows:

“… I don’t think he (Jack) would have minded being called an elder of Pacheedaht band, but he was not. My Dad loved Port Renfrew and worked most of his life here as a logger. He started by travelling from Cobble Hill to Port Renfrew each week and lived in the bunkhouses during the week then dragged us all back out on weekends to show us all that he discovered. He then purchased the old school building and converted it into Port Renfrew’s first motel. Although it never was fully completed as he expropriated by Parks Canada and it took 13 yrs to complete. Anyway, Dad was instrumental in starting and maintaining trail systems here in PR as he always knew that PR was going to be a tourist attraction. Who actually named Chester’s Grove is unknown to me although he and I and a friend wrote the “Hiking through History” book you may have seen in town here.”

One thing that is certain is that the San Juan Valley has a decided magic to it, which I’m sure you’ll savour as I take you on a walk through these trees! I have always enjoyed the Sitka Spruce, which to me is not only a beautiful tree, but the most symbolic of Vancouver Island’s coastal rainforests.

When Duncan and I arrived nearly thirteen years later, some things had certainly changed, while others had remained the same. Those two vehicle wrecks along the trail have deteriorated considerably, to put it mildly!

When you follow the original road which the Lens Creek Trail uses you’ll note it is joined from the left by a newer road, and you’ll want to bear right at this junction and continue on toward the river. Parts of that road, beyond the junction, had been regraded in recent years, and yet another spur had been cleared that parallels the Chester’s Grove Trail. That spur continues on, terminating at the river, beside the grove itself.

It seems likely that there is some harvesting planned for the sixty year old second growth forest that grows beside the grove. Naturally, Duncan and I were hopeful, upon seeing this, that the trees of this grove would be left to stand. Despite that obvious concern, I know of no plans to log Chester’s Grove and it’s been my understanding that the trees there do have protected status.

Just as Chris and I had done years before, Duncan and I then wandered the grove, battling our way to as many trees as we could. They were as grand as ever! The Sitka Spruce there range between nine and thirteen feet in diameter, and the surrounding Bigleaf Maples must be an incredible sight when all in leaf. This grove is also thickly matted with underbrush, and so those expecting a groomed trail might be a little disappointed. Your efforts will, however, be well rewarded, just be careful where you place your steps, as footing can be somewhat challenging!

Once again, we were drawn to the river, where we gained a different perspective. It was easy to conjure up ideas for future exploration, as more towering spruce dot the riverbanks as far as the eye can see, while the hoof prints of elk mark the sand everywhere! Unbeknownst to me at the time, I later read that a mere forty metres upstream there are reportedly a pair of record sized Black Cottonwood trees. They are said to rise sharply on the opposite bank, towering over the maples beside them. According to reports,  both are nearly six feet in diameter, of considerable age when you realize that half that girth generally denotes a tree that’s over a hundred and fifty years old!

I have to say I was elated to see these trees again, and as I now live on Vancouver Island, it will be a whole lot less time consuming to visit them in the future. There was a certain joy in sharing them with someone new, as Chris had once done with me years before. I’m determined to continue searching out the secrets of the San Juan Valley, and I’ll no doubt be sharing those adventures here. If you’re interested in seeing these trees, I highly recommend the experience, for who can resist such a journey back in time?

During my research about Port Renfrew, this publication, dating back to 2005, has excellent notes on local history , among other things. I thought it quite interesting and so I’m sharing here as recommended reading.

I’d also like to acknowledge the Ancient Forest Alliance, who work so hard to preserve Port Renfrew’s old growth.

Most of all, I’d like to recognize the Pacheedaht First Nation, on whose lands I have enjoyed many adventures, and who have always been welcoming to me. When you’re in the area, you might want to consider camping at the Pacheedaht Campground near the Gordon River.

2 thoughts on “Chester’s Grove, Back to the Future”