Spring in the year 2020. For most of us, it’s likely to live in infamy for some time, after all, it isn’t every year that a pandemic takes place. My family is fortunate enough to live on Vancouver Island, where the Coronavirus has not taken a strong foothold yet, but one of the things that keeps me sane is the time I get to spend in nature. Now, more than ever, outside is the place to be! Since there is a beach that is a relatively close to home, I try to walk there often to clear away those negative thoughts. Among the frequent visitors there are river otters, harbour seals, Steller sea lions, California sea lions, myriad species of birds, and even whales if you’re lucky. If all you do is enjoy a seaside stroll once in a while, it definitely improves your outlook on life!

In the month of April, I had the chance to closely observe not one but two incredible events of nature. Frankly, both were so memorable that I wouldn’t have been surprised if Sir David Attenborough himself had appeared out of nowhere to narrate this tale instead of me!

The show began with one of spring’s annual events, the herring run. It’s not difficult to tell when the fish have arrived, because the sea lions appear conveniently at the same time!

In March, you’ll begin to see fishing boats off the shores of Nanaimo on their way to the catch. Herring roe has been a coveted delicacy in much of the world, especially in Japan, and the market for it has been decreasing somewhat, but the fishery still remains active.

Toward the end of March, we’d noticed some limited fishing activity, but in mid April that was to change dramatically. One particularly sunny morning, as we drank our morning coffee, we began to hear the sea lions in full voice. They’d been carrying on sporadically for a couple of weeks, but their callings now dominated for blocks around! With camera gear in tow, I made off to investigate.

When I arrived at the beach, the raucous barking got louder. And louder. And still louder! There was a milky, turquoise swath on the ocean surface that stretched fifty metres from the shore. It was coloured so by all the milt expelled by the male herrings in their haste to fertilize as many eggs as possible. That swath began well westward in the direction of Nanoose Bay, and I later discovered that it continued as far south as Neck Point Park. The waters of the open ocean beyond were a contrastingly brilliant shade of blue.

It was within the slick of breeding herring that the truly frenzied activity was taking place. Hundreds of sea lions rolled in the surf, gorging themselves with fish and playing gleefully. Their barking reached fever pitch, but they never seemed to tire, showing the grace and endurance in the water they are known so well for. Soon I noticed they had been joined by a number of harbour seals. I was convinced that a pod of killer whales was going to materialize, but that didn’t happen in the two hours I was there. It may well have eventually for all I know, because it was a day and a half later before all this activity began slowing down.

Or so I thought…To explain further, in the weeks preceding the herring spawn, we had been using binoculars to watch flocks of unidentified water birds assemble near the shores. They would seem to move in unison, like a well coordinated wave, and seldom flew more than a few feet off the surface. These birds seemed to cover a lot of ground, and to the naked eye almost resembled an oil slick from a distance. Finally, a trip to the beach identified the birds as surf scoters!

Surf scoters (Melanitta Perspicillatta) are large, sea going ducks that make their home in North America. They breed in Canada’s north and Alaska, and winter finds them on The Atlantic and Pacific coasts. The black coloured males make a comical first impression, with bills of black, white, and bright orange with a trademark patch of white on their foreheads and napes. The female scoter is a more subdued shade of mottled brown. Males weigh as much as two and a half pounds, and females are usually half a pound lighter.

The first thing you notice about these ducks, other than their sense of unity, is a seemingly restless nature. They are always feeding, often diving, and nearly always on the move. They are also very vocal, and their constant squawking and squabbling calls can be heard late into the evening. According to my research, surf scoters pair off to breed in winter, so they arrived on our shores as mated pairs. The birds are also unfailingly loyal, and will keep the same companion their entire lifetime. On the east coast of Vancouver Island, yearly herring runs provide an important staple of their diet. They will dive for and feast on the eggs until supplies run out entirely.

Only several days after the sea lions and other predators like gulls and eagles had made quick work of the herring, suddenly these surf scoters began gathering en masse. Prior to that, it wasn’t unusual to see a couple hundred of them swimming in groups, but now, there were tens of thousands! The furor of it all was unimaginable, joined as they were by an armada of other sea birds, most of them gulls.

It was once again an absolute free for all, as the birds moved about in large groups dining on the millions of fish eggs beneath the surf. The scoters did all the diving, while clusters of Bonaparte’s gulls swam beside their flocks. Other sea gulls defended the shoreline, gathering eggs as they washed up with the waves, when they weren’t flying around agitating the scoters, that is. Suddenly, I noticed that I was the only human being on the beach, as everyone else had departed. It was two hours later when I started walking home! 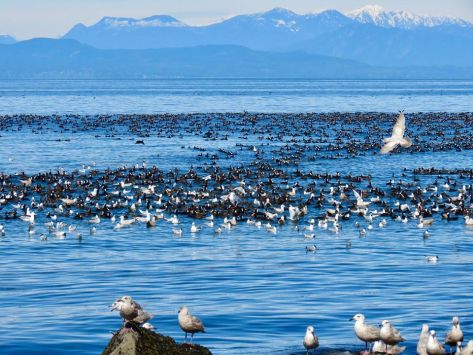 Here they are in action, if you’re interested in watching some videos:

The following day I returned, only to be met with near silence. Some flocks of scoters persisted, but it was clear that their feeding had almost ground to a halt. Several eagles were perched high in treetops, and the odd sea lion swam quietly. Nature, it seemed, was returning to its regular routine. I later discovered that such assemblies of surf scoters had taken place before on the beaches of Nanaimo. One elderly local gentleman spoke of an incident nearly twenty five years previous that was impressive, but he was certain what we’d seen this year far surpassed that gathering. As for me? I can only hope I see a repeat performance someday like he did!