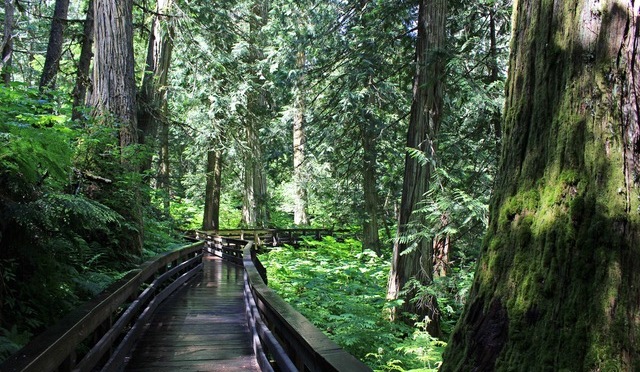 When discussion turns to the great remaining stands of ancient Western red cedar, many people are refer to the trees found on the western coasts of British Columbia and Washington. Even among those interested in hunting down those fast disappearing giants, precious little attention is paid to the few surviving rainforests of British Columbia’s interior. If you have never been to one of these rare and beautiful sanctuaries, then this story might just pique your interest!

High in the upper Fraser River Valley, about 110 kilometres southeast of Prince George and 93 kilometres northwest of McBride, is a surprising grove of trees just off Highway 16, near the outpost of Dome Creek. Ancient Forest/Chun T’oh Whudujut Park and Protected Area, close to Sugarbowl Grizzly Den Provincial Park and Protected Area, is also host to a most unusual climate. Here, all of the right conditions have combined to create something truly magical. You see, this cedar and hemlock forest has somehow managed to exist without any natural disturbance, including a complete lack of fires, for at least a thousand years. It has the added distinction of being further from an ocean than any of this planet’s other inland temperate rainforests.

The quest for the conservation of these trees was a determined one. It was a University of Northern British Columbia graduate student named Dave Radies who first brought wider attention to this incredible place. The forest had already been been marked and surveyed for logging at that time. This story, thankfully, was to have a different ending! After consistent lobbying and a barrage of media publicity, the provincial government agreed not only to preserve the trees, but to designate part of the land as a provincial park! Thanks to the efforts of the Caledonia Ramblers, an extremely dedicated local hiking club, trails were built, and later interpretive signs were posted so that future generations could appreciate these cedars for years to come. Substantial parking space was also created to accommodate the expected increase in visitors. Cooperation between local First Nations and the Province of British Columbia finally led to the official opening of Ancient Forest/ Chun T’oh Whudjut Provincial Park and Protected Area in 2016.

There are a variety of hiking choices in the park. You can choose a boardwalk section that is wheelchair accessible that can be seen in half an hour, the forty five minute Big Tree Loop, a sixty minute trek to Tree Beard Falls, the ninety minute Ancient Forest Loop, and even a 15 km hike along the more rugged Driscoll Ridge Trail, whose western trailhead is  five kilometres west of the park on Highway 16. Not having an entire day to work with, I experienced a good combination of all but the last option! I took a great deal of photographs, and have arranged them, for once, in no particular order. Should you ever visit this park, I think you’d enjoy the opportunity to discover it yourself, as I did!

I can only ponder what it must have been like for First Nations people to discover this woodland paradise. Everything about it seems enchantingly verdant. The understory is alive with mosses, lichens, ferns, and countless other plants. Rising above the forest floor are tall groves of spiny Devil’s Club (Oplopanax horridus), always a challenge to the forest explorer, and a look skyward reveals not only the spiked tops of the ancient cedars, but also their ever present coastal companions, the Western hemlocks. This forest, being inland, is subject to winters that are colder and lengthier than seen on the coast, thus growing seasons are shorter and trees take longer to reach larger girth. Other than the man made structures that have been constructed to preserve the fertile and fragile ground, not much has changed here in the last twenty centuries or so!

Wildlife in the area is considerably varied. At lower elevation, black bear and deer are commonly sighted, as are moose. Above the forest, high on the Driscoll Ridge Trail, you’ll find Engelmann spruce and subalpine fir growing, where grizzly bears, mountain caribou, and even wolverines can sometimes be sighted.

When I hear logging companies talking about trees like these, they speak in terms that confound me, focusing only on harvesting them for cash value before they reach the end of their lives. What they fail to understand is that aging trees, even those that fall to the ground, are the life blood of the ecosystem, allowing for maximum biodiversity and wildlife habitat. That is why what little remains of apex old growth forest needs to be preserved, not cut down! Surely there is room in our resource based society to at least protect the finest of old growth stands that still remain. If not, they will exist only as posts and beams in some grand architectural design, or worse, be shipped off as raw logs to some foreign land to be processed.

Every once in a while, a superb place like this gets discovered, then preserved in its intact state. While most would agree that it doesn’t happen nearly often enough, at least when it does, I believe it sets an inspirational example of what we should be striving for as a society. We need to preserve nature in its intended state and save its very best for all, instead of destroying it for our own purposes. That’s a vision that I know that I can embrace.